How to Detect a Termite Infestation in Your Home

The threat of a termite infestation often lives at the back of a homeowner’s mind, and for good reason. These wood-burrowing insects can affect the structure and stability of a home before you even detect their presence. By educating yourself on the important facts about termites and how to spot a termite infestation, you can stop even the largest colony in its tracks before it carries on its destruction. 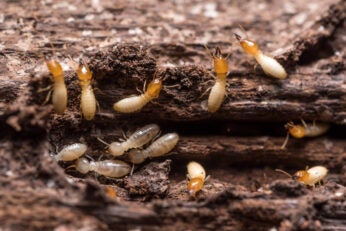 There are three main species of termites in the US, all of which have the ability to sneak in your home nearly undetected until they’ve inflicted some damage on your home’s wooden structures. In this guide, we’ll cover how each species builds a colony, how to eliminate termites, and even how to keep them from coming back.

In some cases, professional assistance may be necessary to keep a serious termite infestation at bay. An exterminator can also help you spot where termites have damaged structures in your home and the best way to protect your space from future intruders.

Top Termite Facts You Should Know

So, what even is a termite? Though it may look related to the ant family, and builds colonies in similar ways, there is no connection between the two insects. With a closer look, termites have wider abdomens and their head is connected to their thorax. Ants have three sections to their abdomens with bent antennae.

Here are some additional top facts that can help you get to know these home pests:

Finding and spotting signs of a termite colony can help you determine if this is the pest you’re actually dealing with. Most termites build flat, muddy tubes about the width of a drinking straw.

The preferred environment of the termite will depend on its species. Eastern subterranean termites build homes throughout the majority of the US while Drywood termites and Formosan termites gather in the southern, coastal states with hot and humid climates.

Since many termites need to keep a moist and safe home, they will most likely remain out of sight in their burrow tunnels and mud colonies. Subterranean and Formosan will typically nest in the soil around your house before making their way indoors. Drywood Termites, however, will come from above, settling in the rafters of your home.

How Termites Damage Your Wood

Though it’s easy to think that termites are simply after the wood in your home’s architecture, they’re really on the hunt for the cellulose that makes up wooden cells. This means that they will also get into any other organic material that also contains these cells, such as books, cardboard, drywall, or even some fabrics.

The most dangerous part of the termite eating process is its tunnel-building process. Over time, these tunnels will make your wooden structures more and more hollow. Elements like staircases, floors, walls, and even counters lose their stability from the inside out and often need to be completely replaced by the time the termites are discovered.

Signs of a Termite Infestation

Termites can be found throughout the entire country—outside of Alaska where the climate is too cold. Even if you have yet to notice obvious signs of a termite infestation, we recommend checking common areas where termites build colonies to catch them before the damage is done. Here are the top signs that termites have intruded on your home:

Inside the Termite Colony

Let’s dive into a little more about the termite colony itself. By breaking down its reproductive process, it can be easier to eliminate the entire colony instead of a few rogue termites. Termites have four main castes:

The King, Queen, and Swarmers

A queen can lay thousands of eggs each year as well as signal the swarmer termites, also known as alates, to branch off when the colony is large enough to start their own sub-colonies.

The king and queen reign over the colony itself, sending signals to the workers and soldiers about the survival of the hive. These two leaders can live up to 25 years, producing tens of thousands of eggs in the process. Much like ants, they relieve pheromones to send information to other nearby termites to keep the colony alive.

When it’s time to build a new colony, the swarmer termites will grow temporary wings, typically taking off around late winter or early spring to mate. This is when you’re more likely to mix up flying ants and termites since they swarm in a similar manner.

It should also be noted that swarmers will shed their wings after the mating process is complete. Keep an eye out for a pile of wings if you’re looking for a new colony.

Worker termites spend the majority of their energy caring for the colony, eggs, and nymphs. They may forage for food, fortify the structure of the colony, or help with general maintenance.

This group is often made up of adult termites that are either unable to reproduce or have yet to mature. If you come across a colony, the worker termites are likely the variety you will see first-hand.

These young, newly hatched termites are easy to identify due to their small, white bodies that have not fully developed. Nymphs will start their young lives as larvae, or immature termites. As they grow, the king and queen will signal whether they should grow wings to become swarmers or remain as workers in the colony.

As the name suggests, these are the protectors against predators of the colony. The soldier termites are typically larger, have bigger mandibles, and are darker overall.

Three Types of Termites in the US

Despite their similarities, the three varieties of termites in the US have distinct mating habits, preferred habitats, and signs of infestations. Here are some easy ways to identify each type of termite that may be in your home.

These are the most common types of termites throughout the country. You’re more likely to find them farther south from the northern border where the temperatures get warmer, but they are found in the summer season throughout the entire US outside of Alaska.

Subterranean termites vary in size and color based on their caste in the colony. They can range from a translucent cream color to a dark brown or black. Worker termites can grow as large as three-eighths of an inch while reproductive termites can be up to a whole inch.

As the name suggests, subterranean termites come up from the soil into your home, sticking to the dark as much as possible. Even though some castes do not even have eyes, they can detect when they find themselves in the light. Large colonies of subterranean colonies can destroy up to a pound of wood a day.

Drywood termites are more likely found along the southernmost coast of the US, but span all the way from southern California to Florida. They also cut through Arizona, New Mexico, Texas, Louisiana, Mississippi, Alabama, Georgia, and South Carolina. In many parts of this region, all three termites can thrive.

Similar to subterranean termites, Drywood termites differ in size depending on their role in the colony. Soldiers are smaller, ranging up to three-eighths of an inch, and male and female reproductives can reach up to one-half an inch. This species is a bit darker than other termites, typically ranging from yellow-brown to dark brown. Young termites may also have gray wings.

Since Drywood termites do not require moist soil to survive, they are more likely to build multiple colonies with ease throughout your home and wooden furniture. These termites are also more likely to come in through higher entry points in your home, typical swarming during the spring and early summer months.

Formosan Termites often congregate in the southern states and Hawaii, thriving best in warmer, more humid climates. They are often spotted in Florida, South Carolina, Georgia, Alabama, Mississippi, Arkansas, Louisiana, Texas, and of course, Hawaii. In some scenarios, they can also live in colder climates up north.

This variety tends to be paler than other species with an orange head and white body. They can also range as dark as a yellow-brown hue. Depending on their role in the hive, they can span up to a half an inch.

Formosan termites form very large colonies with members that can consume a striking amount of wood in a short period of time. They are often considered more aggressive eaters than other species. Within three to five years, each colony of Formosan termites can grow to over a million.

How to Get Rid Of Termites In Your Home

Preventative measures are always the best way to cut down on your termite infestation growing larger or attracting termites in the first place. If you’re looking to take an integrative approach, here are a few tips for discouraging termites around your property:

There is a range of professional-grade termite barriers that can be installed around the outside of your home that keeps subterranean termites from bridging the gap between the soil and your house. These include:

Mulch is a key garden element packed with the cellulose that termites enjoy. Avoid lining your home with this common temptation to keep termites away. Other wood piles such as firewood and paper recycling should be kept away from your foundation as well.

Insects like roundworms can protect your home against termites and other pests. By adding these natural predators to your garden, you can discourage termites from setting up shop.

Homeowners can also purchase common chemical-based baits and traps that aim to eliminate termite colonies. Much like other insect bait systems, the termites enter the trap and carry the poisonous food back to their colony.

You should note that many store-bought termiticides have very specific instructions for handling. Many cannot be used indoors without or around children and pets. When in doubt about DIY termite control, consult a specialist for further guidance.

When is it time to call in a professional for termite extermination? Termite damage can wrack up very quickly, especially when you have a colony in your home. If you are in doubt about the location, variety, or severity of your termite infestation, a professional can answer your questions quickly and efficiently.

Contact a local Terminix office to speak to attentive and caring professionals that have you and your family’s peace of mind. Terminix begins with a thorough investigation of your entire property, seeking out common hiding spots and signs of termites.

Afterward, you can expect to receive a fully customized plan tailored to your unique needs. With the most advanced technologies used today, you can expect that they will eliminate termites quickly, keep them from coming back, and assess the damage done to your home.

As long as your termite plan is activated, Terminix will return for free ongoing inspections to be sure you’re safe from termites year after year.